Late in the evening on March 31, the Indian government released a circular saying that the interest rates on various Small Savings Schemes for the first quarter of financial year 2021-22 starting from 1st April, 2021 to 30th June, 2021 have been cut. Within 12 hours of this bold decision, the Indian government withdrew its order – rolled back the interest rates cuts and asserted that the order was issued due to an “oversight.” Was it a prank? Was it an April Fool’s joke? Well, the announcement could have easily been taken as a prank had it not come from the official Twitter handle of Nirmala Sitharaman on Thursday morning. This article puts a light on the concept of Small Savings Schemes, why the government prefer lower interest rates and why the government shouldn’t simply just play around the interest rates of these schemes.

What are Small Savings Schemes?

What did the Government Announce and What had Changed?

Senior Citizen Savings Scheme (SCSS) is a scheme in which an Indian resident above the age of 60 – either in individual or joint capacity can invest up to the amount of Rs 15 lakh. Over the years, the scheme has remained to be one of the most reliable investing instruments for the elderly as it provides high assured returns with minimal risk involved. The government proposed to reduce the interest rates on this scheme to 6.5% from 7.4%. 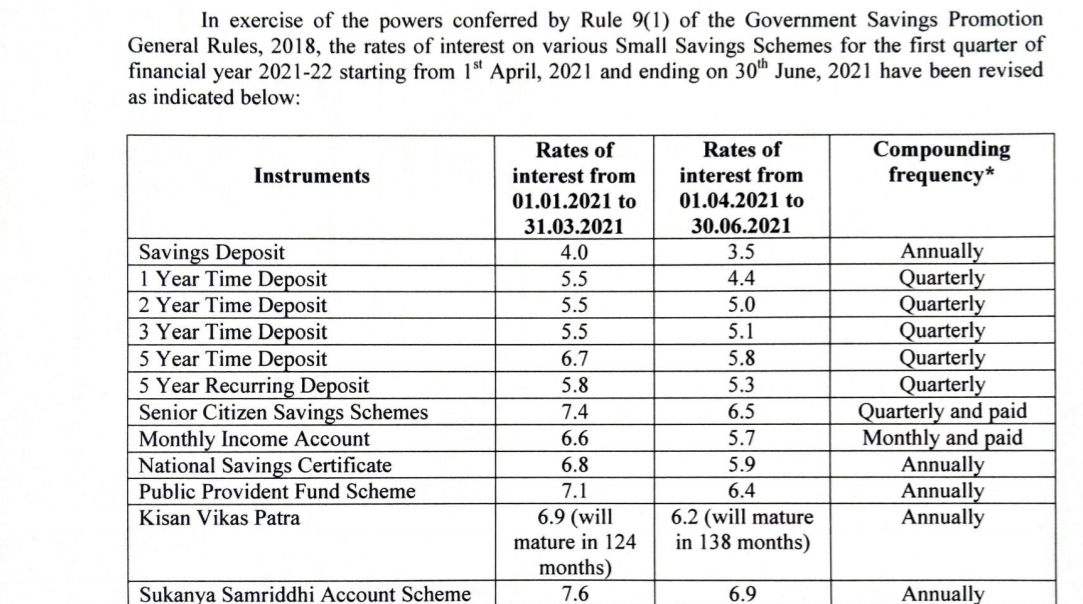 Sukanya Samriddhi Account Scheme is a scheme in which an individual investor having a daughter(s) of age less than 10 can enjoy the benefits of assured returns, tax benefits etc. so that the returns can be used for child’s education and marriage. The scheme has been designed to uplift the living standards of a girl child in the society. The Indian government had reduced the rates on this instrument from 7.6% to 6.9%.

Kisan Vikas Patra is a popular scheme which helps to facilitate people to invest in a long-term savings plan. It draws the attention of investors by offering to double one time investment in 124 months. The scheme was initially designed for farmers but many poor and middle-class people enjoy its benefits. The government had reduced its rates to 6.2% from 6.9%.

Public Provident Fund (PPF) is yet another popular investment scheme among the Indian middle-class in which an individual can accumulate an amount for a period of 15 years. PPF is efficient for the long-term goals that we aim to achieve in 15-20 years (for example buying a car or a house). Many people see it also as a “retirement scheme” since it encourages the habit of savings for the long run. The Indian government sought to reduce the rates on PPF to 6.4% from 7.1%.

Similarly, the Indian government had reduced the interest rates on other Small Savings Schemes such as National Savings Certificate and Monthly Income Account.

Why Did the Government Take a Quick U-Turn?

The Finance Ministry was very quick enough to take a U-Turn on its own decision. Barely within 12 hours, the government withdrew its decision of interest rates cuts as Nirmala Sitharaman tweeted: “Interest rates of small savings schemes of GoI (Government of India) shall continue to be at the rates which existed in the last quarter of 2020-2021, ie, rates that prevailed as of March 2021. Orders issued by oversight shall be withdrawn.”

She has claimed that the order was issued by “oversight”. However, the experts from the sector have doubted the excuse of “oversight” as the rates on these Small Savings Schemes are reviewed every quarter of each financial year. Then what could be the possible reason? Let’s see.

India is currently in the middle of election chaos where the elections of major state legislative assemblies will be held in the next few weeks. Interestingly, the Indian government’s U-Turn came on the day of the second phase of Assembly elections in West Bengal and Assam. In the following graph, I have plotted the collection from Small Savings Schemes based on the data from National Savings Institute for different election bound states.

West Bengal accounted for 13.2% of the net collections out of the total collections that was collected by Small Savings Schemes. West Bengal is only behind Maharashtra in terms of contributions to the Small Savings Schemes and even from the other states, the contribution to these instruments is significant. As per the data, the collection from these states account for nearly 24% of small savings schemes collection in terms of gross collections and 23.4% in terms of net collections. Undoubtedly, the Indian Middle Class are the major contributors to these schemes. The data makes an interesting finding that the decision of interest rates cuts would have severely impacted BJP’s election outcomes in these states. The Bharatiya Janata Party would not have simply risked their middle-class vote banks.

The government’s decision was also heavily criticised on social media platforms by opposition parties, journalists, media houses, etc. but the government which seems totally “unbothered” about the ongoing farmers protest, structural deaths of marginalised sections of the society, repetitive criticism from the experts on various socio-economic issues – will definitely not take into the “criticism” part to change their stance on interest rate cuts. Therefore, the government’s quick decision was merely influenced by the political factors, reflecting the sheer desire of winning elections by whatever means.

The interest rates cuts came at a time when the inflationary tendencies are highly prevailing in the economy and as the Indian economy recovers and consumer demand revives, the inflation is also expected to rise further in the coming months. As per the latest data, the retail inflation has risen to three-month high of 5.03% in February from 16-month low of 4.06% in January – owing mainly to the rising food and fuel prices. In light of this inflationary aspect, the cuts in the interest rates of Small Savings Schemes wouldn’t have yielded satisfactory returns to the investors.

Core inflation (which excludes food, fuel and light items) is one of the important indicators that determines underlying long-term inflation in the economy and is more relevant to the Indian middle-class. India’s core inflation is hovering around to 6% and hasn’t softened despite unstable consumer demand. Many rating agencies like Moody Analytics have also expressed that the inflation is uncomfortably high in India.

Taking all these factors into account coupled with the declining real rate of interest (real rate of interest is nominal interest rate adjusted to inflation), it is quite evident that the small savers were already being hit hard by the low returns on their life savings and the government proposed sharp interest rates cuts would have had drastic negative consequences on the personal finances of the people who are dependent on these savings instruments – mainly senior citizens and the Indian Middle Class.

How does the Interest Rates Cuts Benefit the Government?

The Indian Middle-Class Bears the Cost

The lowered interest rates are not generally bad for everyone as they are often expected to trigger an economic recovery. At lower interest rates, people are expected to borrow and spend more – as they will have more cash in their hands. Firms are also expected to grow as even their borrowing costs reduce and they borrow more to invest. This Keynesian understanding of economic growth through interest rates mechanism need not to be always true as there are many instances where lower interest rates did not help to drive economic recovery. But “borrowers” are only one part of the equation and it is often ignored that the “savers” are also the part of that equation. A cut in Small Savings interest rates might benefit the borrowers (mainly the government and corporates) but the savers would have definitely been hurt as it negatively impacts their life savings, expected returns etc.

A considerable section of the population – mainly the Indian Middle Class and the retired citizens are dependent on the interest incomes from these saving instruments to meet their expenditure needs. In the environment of declining real interest rates, higher expected inflation rates – the Indian Middle Class have already been hurt and the reduction in the interest rates would have further impacted them. It is important to keep in mind that almost 84% of household savings are made in Provident funds, Pension funds, Small Saving Schemes and the fixed deposits – indicating that the fall in interest rates impacts a bulk of India’s savers. The lower returns on their saving instruments negatively impacts their private consumption, further negatively affecting the economic growth.

The aspect of savers is ignored by various experts, the RBI and the Indian government. The economic recovery cannot merely be pulled off by reckless borrowing without keeping the aspect of savings in mind.

Many people believe that the rollback of interest rate cuts is temporary and the rates announced on 31st March are an indication of where the Indian government is intending to head in coming months. The government could announce the interest rates cut again, most probably after legislative assembly elections are over. The government is looking for options to reduce their cost of deficit financing which makes the case of interest rates cuts very likely in future. Therefore, an individual investor should reconsider his investment plans in these savings instruments.

In an environment where deposits rates are not keeping up with the lending rates and the declining yield on government bonds, it is quite obvious for interest rates to fall. In the recent months, the Reserve Bank of India has also printed and pumped more currency into the financial system which further drives down the interest rates. The lower interest rate benefits the “borrowers” side of the equation – such as hedge fund managers, economists, stock analysts, the government and so on but for savers, they see returns on their investments going down.

As discussed earlier, the economic recovery cannot merely be driven on the dependency of “borrowers” as government borrowing comes with a certain cost which are generally not incurred by the government but by the general public.

Kerala and K-rail Silver Line: An unplanned case of prioritizing

Content is King: The Economics of Social Media in driving Self -Employment

Sri Lanka: A Note on Crisis

Theory versus Behavior – Does One Size Fit All?

Kerala and K-rail Silver Line: An unplanned case of prioritizing

Kerala, popularly known as God’s own country, is one of ...

Content is King: The Economics of Social Media in driving Self -Employment

Communication across the world has evolved due to advancements in ...

Sri Lanka: A Note on Crisis

The COVID-19 pandemic has affected the global economy but the ...

Please input your email address. That email is already subscribed. Your address has been added.